Brand claims further that, since the products do not meet the regulatory definition of being low calorie, Slimfast is required by federal regulations to include a disclaimer acknowledging they are not meant for weight control.

“The failure to include this disclaimer makes the labels’ claims false, deceptive, inaccurate and / or misleading,” the class action lawsuit states.

Brand claims a single six-ounce serving of a Keto Fat Bomb chocolate snack cup is around 90 calories, more than a Reese’s Peanut Butter Cup of the same size.

Slimfast markets its Keto Fat Bomb products in a way that makes them appear to be low-calorie so it can “capitalize” on the current consumer “craze” for food that is high in protein and low in carbohydrates.

“But contrary to common-sense consumer expectations, these snack cups are far from low-calorie foods,” the class action lawsuit states.

Brand claims she and other consumers relied on Slimfast’s marketing claims when purchasing the Keto Fat Bomb products, which she says turned out to be “inadequate product sold under false pretenses.”

Brand claims Slimfast is guilty of unjust enrichment and in violation of California’s Consumer Legal Remedies Act and several of its Business & Professions codes.

Plaintiff is demanding a jury trial and requesting declaratory and injunctive relief along with compensatory, incidental, consequential, statutory, treble and punitive damages for themselves and all class members.

A similar class action lawsuit was filed against the makers of Arnold Palmer Lite Iced Tea over claims they misled consumers about the amount of calories the drink contained.

Have you purchased Slimfast’s Keto Fat Bomb products? Let us know in the comments!

We tell you about cash you can claim EVERY WEEK! Sign up for our free newsletter. 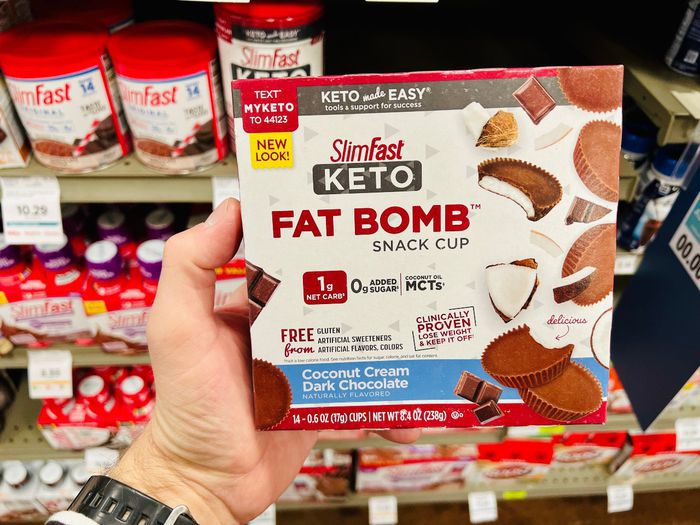