Hulu’s “The Dropout” tells the story of disgraced healthcare entrepreneur Elizabeth Holmeswho claimed that her company Theranos had developed a way to revolutionize blood testing for diseases. Since it was discovered that she defrauded investors about the technology, Holmes has been found guilty on charges of criminal fraud and is currently awaiting sentencing.

Interestingly, at Holmes’s hearings, she received quite a bit of support from people claiming to be fans. Emulating Holmes during the height of her Theranos tenure, women wore turtlenecks and plain black suits and donned messy buns – Holmes’s signature hairstyle – as they waited to hear her charges. “The Dropout” ‘s premiere on Hulu last week where deeper into Holmes’s look as she rose to power in Silicon Valley.

To better understand how Amanda Seyfriedwho plays Holmes in the series, transformed into the character, we spoke to “The Dropout” ‘s hairstylist Vanessa Price about how she approached the infamous entrepreneur’s hairstyle. We uncovered everything from her most-used product on set to the specific hair moments from Holmes’s real life she had to recreate on the show. Read on for behind-the-scenes hair secrets from “The Dropout.” 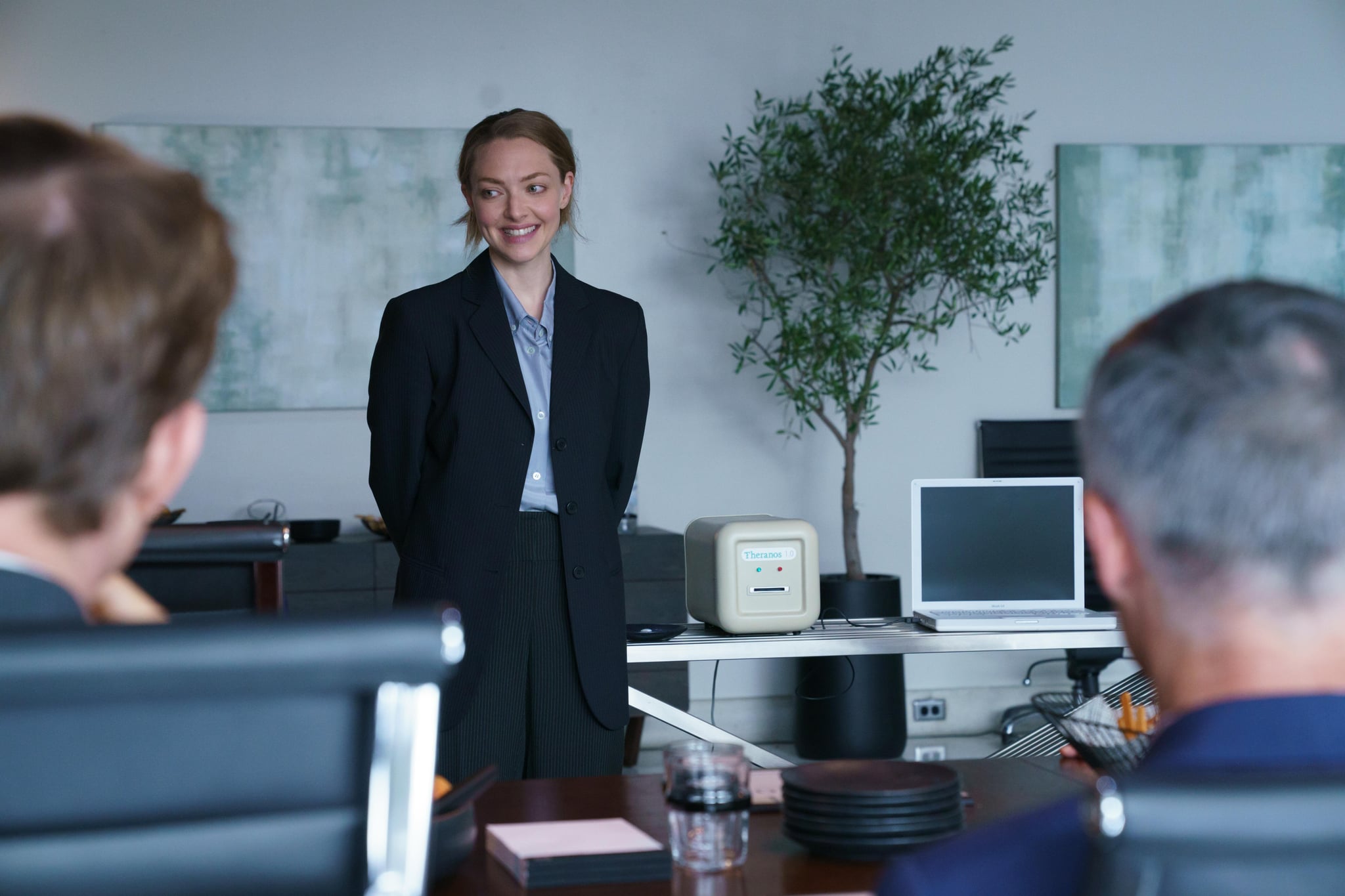 Image Source: Hulu / Beth Dubber
From the beginning, Price knew that the conversation surrounding Holmes’s hair centered around one main characteristic: frizz. “Elizabeth Holmes had this frizzy hair – it’s something that I recognized looking at photos,” Price says. “So we experimented at the beginning with the texture, and we came up with a formula and let that ride throughout the length of the show.”

But it wasn’t just about the frizz, Price says – it was about understanding what the frizz represented to the character. “[In] the documentary about her, she had a way of pulling herself together somewhat, but it seemed as though she didn’t really know how, “Price says.” She knew that she had to do something, but she didn’t quite know how. to achieve the look. “

How the Hair in “The Dropout” Moved the Storyline Along

Holmes’s seemingly blasé attitude about her looks was pivotal in her fight to be taken seriously in a world dominated by men – a fact that Price was well aware of she created the hairstyles on the show. As she secured more and more investors, Holmes started looking less “frazzled” and more polished.

“[Holmes] knew she had to put her best foot forward, “Price says.” Each person has their own best foot. And for her, I don’t think she really knew what that meant, but she knew she needed to pull [her hair] back. When you look at businesswomen around the world, a lot of times their hair is pulled back so as not to be distracting, so I think Elizabeth did pull her hair back in a little messy bun often [for that reason]. That was our signature look that we went with for her to ‘pull it together,’ but we still maintained a level of frizz and a level of ‘frazzled-ness,’ if you will, that we would ramp up and take down throughout the story, given the circumstances. “

While Holmes’s signature unkempt hair gave a careless feel, Price says that achieving the style was anything but that. “Perfecting that messy bun was very challenging,” she says. “It goes against everything we know, and continuity-wise, it was a little difficult.”

Some of the key products used to nail the look included lots of hair ties and texturizing sprays. “I can’t and couldn’t live without it Living Proof Dry Texture and Volume Spray ($ 32). It gave us the frizz and the airiness we needed, “Price says.

Seyfried also underwent a few subtle hair changes to fully step into Holmes’s character. To start, she got a new hair color. “We lightened her hair to give it a little bit more of a streaky, pale-blonde, chunky-highlight look,” Price says. Seyfriend also got a trim. “We thinned out Amanda’s hair significantly, as much as we could without making her look crazy in real life,” Price says. “She allowed me to take pieces of her hair and cut them here, cut them there, in kind of a purposefully disorganized fashion to make sure we were on the same page for what Elizabeth needed to look like.” 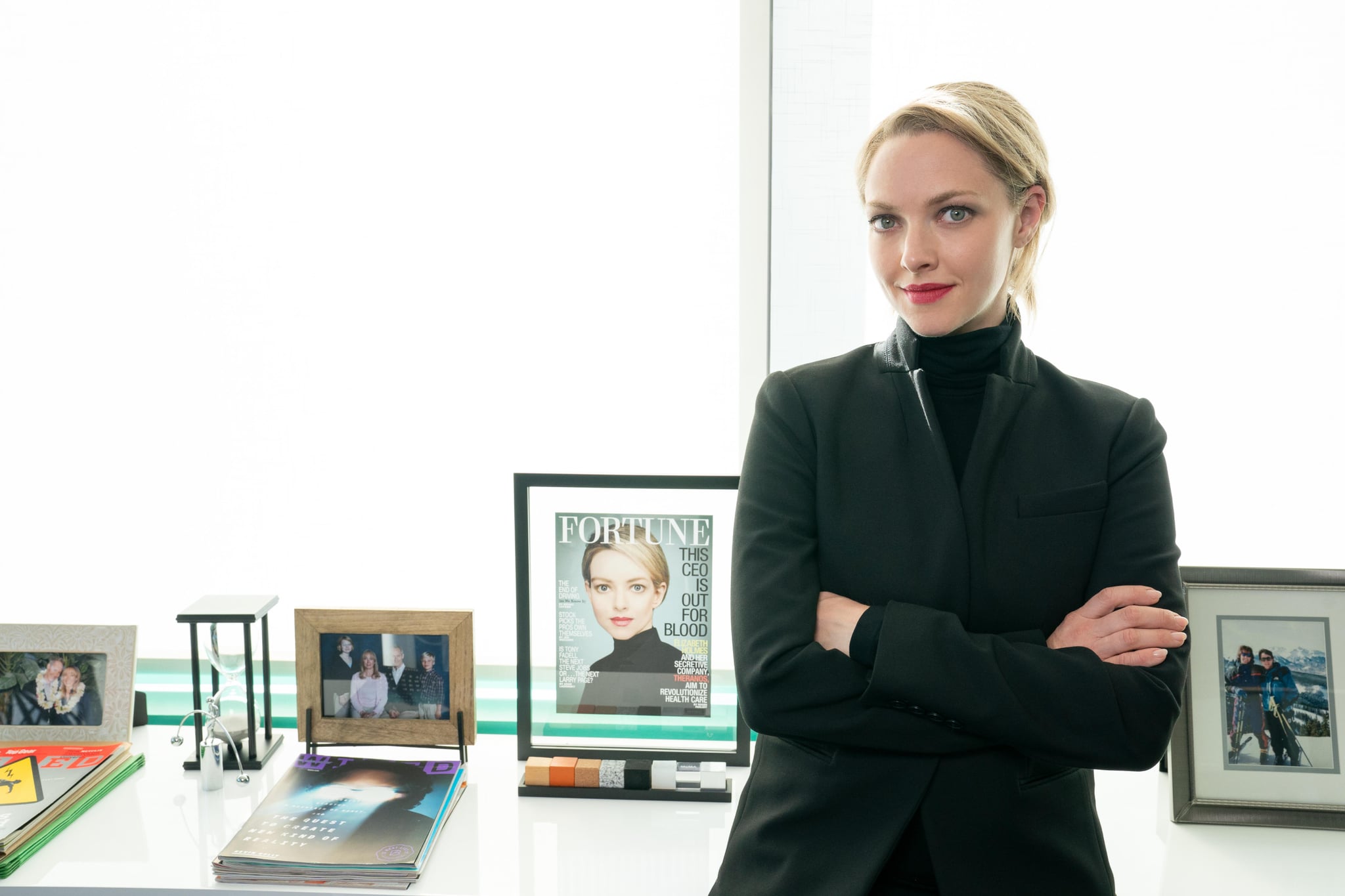 For Holmes’s signature “frizzy bun” on the show, Price used a few additional products. “I use a lot of beach products, so what would I do with her to get some nice frizz without making it crazy was when her hair was in that bun, I would spray Friend Bushwick Beach No-Salt Wave Spray ($ 25) in my hands, rub it together, and take it on top of her head, “she says.” I would hold my hands on top of her head and then just slightly push my hands forward to create this level of frizz. “

The Meaning Behind the Hairstyles on the Show

Price used the hairstyles on the series to show Holmes’s relationship to other people and to reflect the stage of life she was in. “When she was younger, we did a lot of low ponies and a couple of low braids,” she says. “We pulled her look together, you’ll notice, with her mother. Whenever she was with her mother, we tidied her up a little bit, because – and this is something that you’ll see in the first episode – her mother criticizes her look and her image. [Sprucing it up] was something I think she felt she needed to do when she was around her mother, and we used some headbands for that. “

Price also tapped into a few of her own experiences while conceptualizing Holmes’s hairstyles. “Teenagers don’t typically know how to do their hair at all. They don’t learn that until much later,” she says. “I know for myself growing up, we were just figuring it out. For me, I’Il come with a mood board of ideas that capture what I think hairstyles for a certain time in her childhood would look like and for what I think would work for her college years. “

One thing that viewers might be surprised to learn is that hairstylists have to consider an actor’s obligations outside of the show – which was the case for Price.

Seyfried “has contracts with L’Oreal and Lancome and has additional obligations outside of the show,” Price says. Because of this, she created an additional routine for Seyfried to make sure that her hair remained healthy while playing Holmes: “Every weekend when she wasn’t working, I had her use the Olaplex Bond Maintenance Shampoo ($ 28) and Conditioner ($ 28) to make sure her hair was protected. “

Price says that people won’t necessarily pay attention to the show’s hairstyles – nor should they. “If [people are] paying attention to the hair, then we’ve all done a really shitty job, “she says.” But one of the things that we did intentionally was highlight the juxtaposition between her and the other characters, even small characters. Unless there’s a huge emotional moment, even with some of the smaller day-player characters, everyone is very neat and very tidy, so her characteristically frizzy, unkempt hair naturally sets her apart from everyone else. “